Our celebrated class of 1955 has been immortalized with a new Tennis Pavilion dedicated to our classmate, Jay, and Mimi Morsman. Jay was Head Coach of Boys Varsity Tennis for 29 years in which his team won two New England Championships and a National Championship. The new indoor facility will allow players to stay-tuned year round. .. Two more Marine Corps officers have been selected as recipients of Tim Day’s Marine Corps Entrepreneur program at Harvard Business School. Tim and Sandy also provide a greatly appreciated “helping hand for abused and abandoned dogs” via Lulu’s Fund which is named after their beloved pug, Lulu. .. Merry and Tom L’Esperance have returned to Carlsbad, CA, after a wonderful year long break in Kauai. We’ve noticed a dramatic increase in traffic and congestion as more snowbirds are flocking to sunny Southern California. We’re glad that we’ve earned our retirement papers and aren’t commuter worker bees anymore. .. As a reminder our Class Notes and The Scroll can be accessed at: http://deerfield.edu/alumni/class-of-1955/class-notes and http://deerfield.edu/scroll/ .. Please write us a note about your goings-on for the next issue of Deerfield Magazine. 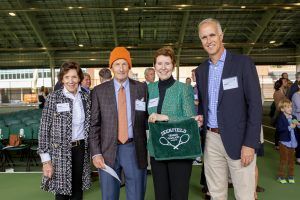