There were always promises made…They started immediately after leaving Deerfield Academy in 1976 with the occasional letter, a rare phone call, or a trip that linked some, but never all, together for a memorable evening. To be certain, with every milestone invitation to the 5, 10, 20, 30 and 40-year Deerfield reunions, we were enticed but resisted nonetheless. Our happy memories of a special place at an innocent age with great friends was frankly good enough. How unsettling it would be if we discovered that our youthful friendships were as ephemeral as our youthful girlfriends. Yet we continued to repeat the same unfilled promises year-after-year decade-after-decade in postal stamped holiday greetings, wedding invitations, and birth announcements. These sentimental exchanges were downgraded in the late 1990’s with emails and then again with phone texts but they were always welcomed. Fortunately, I believe future communications will likely never devolve to Facebook or Snapchat as it appears the Class of 1976 is largely devoid of the “self-promotion gene”.

Indeed, at the end of every exchange, we promised to get together. And then, suddenly, the cycle of unfulfilled wishes was broken. David McCullough dared Joe Finigan and me to schedule our very own 41st Deerfield Reunion the final weekend of July 2017.

We did not settle on Cody, Wyoming because it sits just east of Yellowstone Park and is among the most spectacular places in the world to visit. We decided on Cody because our most recluse “soulmate” returned there four decades ago and best we can tell never left. And although Bill Simpson was sworn in as Wyoming’s newest Judge immediately following our visit, I had to learn of this significant accomplishment from a breakfast waitress at the Irma Hotel, Buffalo Bill Cody’s original drinking saloon. Never one to draw attention to himself, Bill cited a commonly held fiction that cell and internet service in Northwest Wyoming is spotty if non-existent for most of the time one goes about their daily responsibilities. Besides, we agreed on meeting in Cody largely because it would allow Bill Simpson just 15-miles to retreat to his rural home – with an exotic postal address that includes 1198 Road 18.

Well the weekend came and went and it is fair to report that if there is a wondrous afterlife, we likely were given a rare “sneak peak”.

We tip our caps to the broadmindedness of Deerfield’s Admission staff for putting the four of us together so many decades ago. And cheers again to the current Administration for passing along the same Deerfield traditions to Samantha (2010) as well as her sister Elizabeth (2013) who never waste any opportunities to renew their Deerfield friendships. 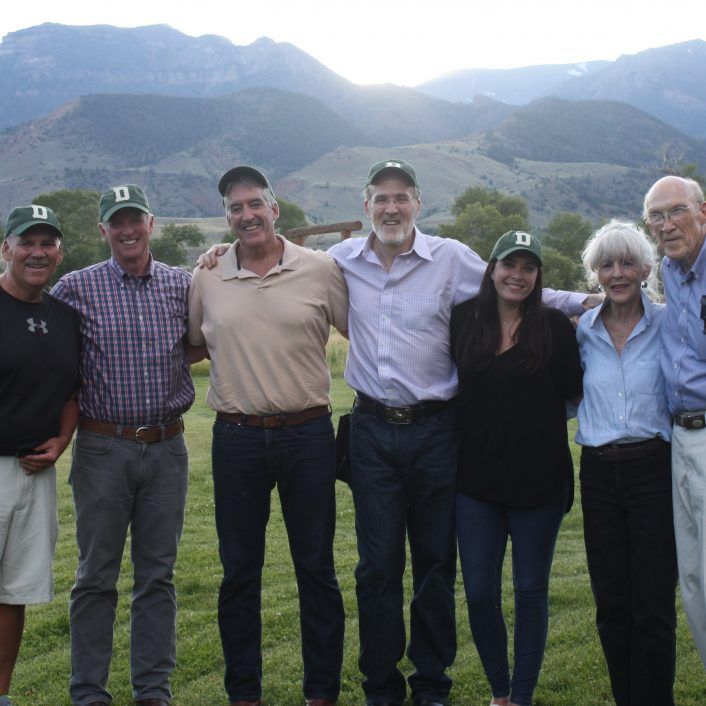