An update from Dee and Lou Greer who now qualify as our itinerant class travel and cruise line consultants: “I volunteered for both the March SEC women’s basketball championship tournament held here in Greenville, SC, as well as working at the NCAA Southern Region rounds one and two of March Madness, also held here, For the former, I hosted the Kentucky Lady Wildcats and the LSU Lady Tigers. For the NCAA I was a Cup Monitor. Before you get the wrong idea, a cup monitor checks all media reps and table officials to be sure that they don’t go courtside with drinks that are contained in anything other than an official NCAA paper cup. Really! That’s an important distinction, given the value of sponsorships. .. Dee and I will be in New England for a grandson’s graduation from Suffield Academy in May; then a family visit in New Hampshire. In August we’re cruising from Edinburgh to Dublin with stops in between. It’s on the same ship we took on our first trip together a dozen years ago, although the vessel is now owned by a different cruise line.”

In a note to Lou Greer, Peter Esty relates that “Happy and I are currently in a cabin on Squam Lake, NH with all our kids and grandkids, celebrating our respective 80th birthdays. We are in midst of a 2-month driving trip across the country, 7/1 to 8/30, seeing sights, friends, relatives, and stopping for 3 different week-long sojourns to glorious summer spots. Again, L U C K Y !! We have health and still enough energy. Trusting you do too. All best from us both.” Let’s add Peter and Happy to our list of consultants as masters of months-long cross country road trips.

Tim Day was the Guest of Honor at the reception and Evening Parade at the Marine Barracks Washington, D.C. on July 7, 2017. The Evening Parade is a unique patriotic tradition of the “Oldest Post of the Corps”, and represents with dignity and pride, more than two centuries of heritage for all Americans. The history of the Evening Parade can be viewed on the website

In the May 27, 2017 issue of the Deerfield Scroll, there was an interesting article about surveys conducted by several New England boarding schools that was captioned “State of the Academy.” According to the article, it stated that “kids in highly achieving schools are more at risk of depression and anxiety and substance abuse.” Dr. Suniya Luther reported understandably that student’s anxieties are mostly caused by pressure to get into a prestigious college. She relates that “big-name colleges do not guarantee enjoyable experiences.” Dr. Luther advised the students to “pull back” from their self-imposed pressure and that “you’ll get into some college” having gone to Delhi University in India herself as an undergraduate. I’m reminded of the “brilliance and magic” of Mr. Boyden years before that was related in a letter to the Deerfield alumni by Sheila Dennis: A senior, who when asked where he wanted to attend college answered, “Mr. Boyden, I’d like to go to Harvard.” The Headmaster’s response? “Well, I can get you into Harvard, but you won’t have any fun there. You won’t play sports and all you’ll do is study. I think you should consider Colby.” “So I went to Colby,” the now octogenarian continues, “and he was right. I played varsity soccer and hockey and I loved it.”

Caption for the photo: The Headmaster 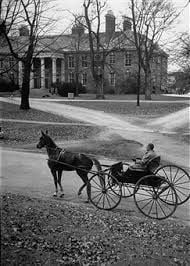