Nancy and Carl Hedden added their own touch to the Shepherd’s Pie recipe featured in the previous (Fall 2016) issue of the Deerfield Magazine. Carl suggests that “a change to half corn and half peas would give it some needed color as in Deerfield Green.” I would also add carrots to the mix for even more color and taste. We don’t recall being served Shepherd’s Pie at DA, but the hair style depicted in the Dining Hall photo suggests that it was taken long after our Traditionalists Generation had been supplanted by the Baby Boomers.

Mike Grant and Betsy Grant are headed toward the Big Island in late January. “We’re looking forward to our Hawaiian adventure. It’s a long way to go from here, but we thought we’d give it a try.” They won’t be disappointed. Coincidentally, Lou Greer relates that “Dee and I will be headed to the Hawaiian Islands in January to enjoy a cruise through the islands on a so-called boutique yacht, a small ship carrying just 36 passengers. We’re hoping to break bread with Peter Clapp when we debark from the cruise in Kona.”

Tim Day had the pleasure of introducing General James “Mad Dog” Mattis who gave insightful comments reflecting his many years of command experience in trying times. The general spoke at Tim’s Forum Retreat dinner in Palo Alto, CA, in October. A subsequent whirlwind swing of the East Coast included a stop at the Semper Fidelis Memorial Park in Quantico, VA, which included a tour of the 117,000 square foot expansion project at the National Museum of the Marine Corps that his Foundation is helping to finance. Tim, Sandy, and his daughter, Leslie, visited with some of his HBS MBA Fellows and also met with Nitin Nohria, Dean of the Harvard Business School, while they were in Boston.

Bruce McEwan weathered severe internal health issues during October and November. By now he knows his doctors on a first name basis as do most of us nowadays! Bruce is recovering nicely at home in Orlando now with M.L. as his co-pilot. The Honorable former member of the Florida House of Representatives will be a stirring Co-Chairman of our 65th Reunion.
Caption for the photo: Bruce McEwan and Ward Elliott catching up at the 60th Reunion of the Class of 1955 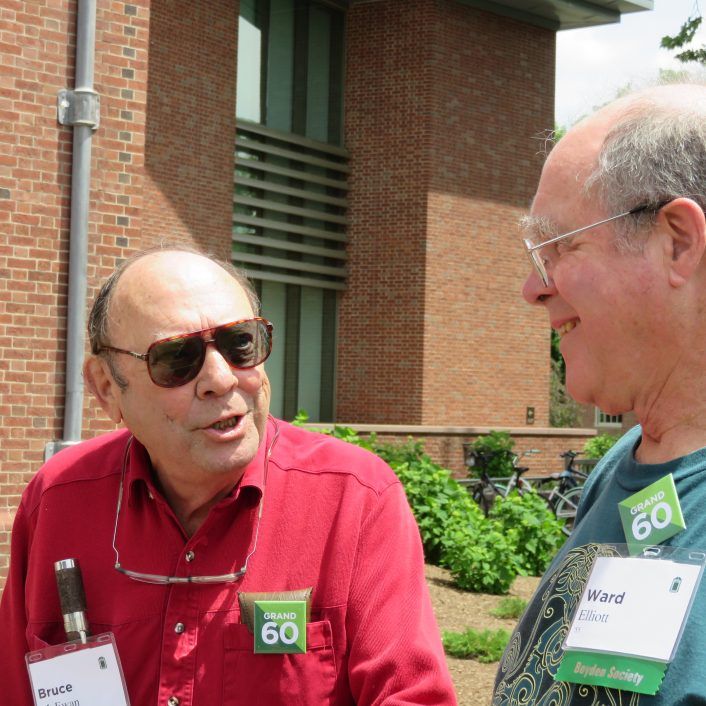