Our esteemed classmate, Ambassador Joseph V. Reed, Jr., passed away at age 78 on Sept. 29, 2016. He was a long time resident of Greenwich, CT., and truly a global emissary. In the words of David Rockefeller, “He was a man of elegance, grace, wit, flamboyance and razor sharp intellect, a diplomat’s diplomat. As my closest associate for three decades at the Chase Bank, together we traveled the world, experienced unforgettable adventures and met thousands of people, from kings and presidents to hotel clerks and elevator operators. Joseph cherished and charmed every one of them.” He served as Ambassador to Morocco from 1981 to 1985, and was appointed Chief of Protocol of the United States by President George H.W. Bush from 1989 to 1991. The former president stated: “He was by my side during some of the most critical moments of my presidency, the quiet mastermind who literally help set the stage for the diplomatic progress we made during a historic period of global change.” Joseph subsequently was appointed as Under-Secretary-General of the United Nations in 2005. Reed received many governmental awards including France’s Legion of Honor. An impeccable dresser, Joseph ranked eighth as one of the 10 best-dressed men in the world.
Since their boyhood years, Mike Grant relates that “Reed was a long-time friend as you can see from the attached photo. He was a unique character, formal and elegant (he was always the best dresser at Deerfield) yet hardly a snob. His career in banking and diplomacy was marked by unusually close relationships among the leaders in finance and later in Africa, and he was a devoted servant of the United Nations. The Reed family has been a generous and loyal supporter of Deerfield for ages. Joseph was the last of four brothers to matriculate there. When his father, Joseph Sr. used to visit, Mr. Boyden put him up at the Manse, and I remember Mr. Reed cooking for us, and then regaling us with stories. He was a fascinating man, and his sons inherited that charm and ability to enthrall a group. Mr. Reed donated a rare “Double Elephant” folio of Audubon’s birds of America to Deerfield, and subsequently the family agreed to Deerfield’s decision to sell that artifact which funded the building of the Reed Arts Center.
If not for the Reeds, I probably would never have come to Deerfield. Joseph’s mother convinced my family that it was the place for me. Once there, I lived with him in the old infirmary sophomore year, across the hall from him in the “Old Dorm” as a junior, and finally on Crow’s East One corridor in the “New Dorm” which nobody knew as Plunkett Hall. Terry Blanchard, Calvin Fentress, Eddie Dick, Arthur Diedrick and myself were regular companions, and we often spent time together on vacations. Joseph was athletic as well, having been the Varsity right wing on Merriam’s soccer team, and in his later years he loved to play tennis. His real interests, however, were more directed to social and political history.
Joseph’s home base was Denbigh Farm in Greenwich where he grew up. It was a beautiful estate, developed by his father, and we loved to be invited there for games and evenings of conversation. It stood next to the Audubon Center which was created by his family. Sadly, his lovely wife Mimi died a year ago, and he deteriorated from Parkinson’s swiftly after that. A memorial service will be arranged by his daughters Serena and Electra in time.”
Terry Fuller adds: “Michael, what wonderful history on you and Joseph. It brings back some wonderful memories and I particularly enjoyed being left wing on the varsity soccer team directly opposite Joseph on the right wing. Coach Merriam would help us set strategies for crossing the ball across into the goal area which was our major “wing” assignment. And particularly important were the corner kicks which Joseph excelled at. Your photograph with all the young guys is exceptional and it’s clear you had a very special and personal relationship with Joseph over all the years. I know how meaningful that has been to you.”
As Joseph frequently ended his phone calls we bid him farewell with a resounding “Aloha”.

Photo captions: #1. Submitted by Mike Grant: “The attached photo was taken around 1948 in Hobe Sound Florida, a Reed development. It celebrated Adrian’s victory over an alligator who he had hooked while fishing, and subsequently chased him into a nearby building. Left to right the individuals (6 Deerfield future graduates) are: Tim Grant ’59, Joseph Reed ’55, Nathaniel Reed, ’51, Ted Hamm, Mike Grant ’55, Adrian Reed ’49, and Terry Blanchard ’55.”
#2. Submitted by Terry Fuller: ” .. a recent picture of Joseph with a young curator from the New York Botanical Garden. I took this in June this year when Joseph invited Sharon and me to join him for a private showing of the roses at their peak. It was a wonderful outing and a beautiful day.”
#3. Joseph V. Reed, Jr. at home. Photo by Bob Luckey in a Greenwich Time article.
#4. Ambassador Joseph V. Reed, Jr. Courtesy of Google Images. 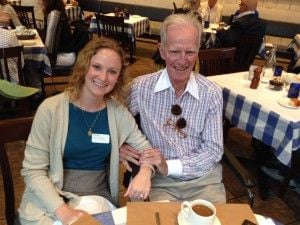 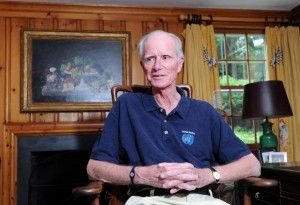 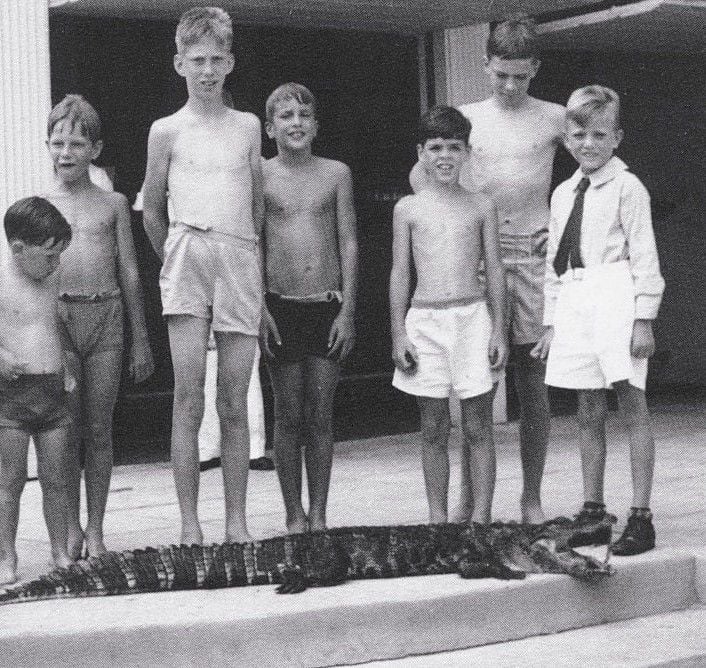