Our classmate, Charles R. (Chuck) Parsons passed away unexpectedly on August 8, 2016, due to lingering health issues. Chuck attended Deerfield from 1953-55, and graduated from Dartmouth College in 1959. He served as an officer in the U.S. Army until 1962 when he joined his family insurance agency and served the insurance industry with distinction as a Certified Insurance Counselor for the next 40 years. He became president of the Professional Insurance Agents of New York between 1975-76, and was awarded PIANY’s Committee Chairman of the Year award in 1970. Following Chuck’s footsteps, his son, John, will be installed in September as President of the PIANY, the family’s third generation of presidents in the organization! Chuck leaves behind his wife, Elfriede Anna, two sons, Robert and John, a daughter, Kristin, and six grandchildren.
Chuck led a full life as he related in his 25th Anniversary Dartmouth yearbook: “Boating, tent camping, and fishing on Lake Ontario and the Finger Lakes are principal pastimes in the Summer. Light reading, an Apple computer, and Syracuse University sports occupy the balance of our leisure time in Central New York. I have been incredibly well blessed!”
His obituary can be found in the Syracuse Post-Standard Newspaper. 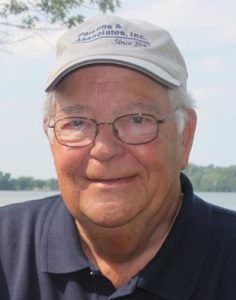