During the Fall of 2008, a group of young Deerfield Boys gathered in the sacred Greer Store to discuss and ponder what their future may hold. They dreamed of becoming doctors, lawyers, professors, inventors and high financiers. Some, such as Tucker Dayton ’10, even had dreams as farfetched and utterly unattainable as becoming professional hockey players. As they sat and admired the beautiful evening in the valley, it occurred to them that there may be one thing, and one thing only, even more important than chasing their dreams: fantasy football. And with that the Deerfield Academy Fantasy Football League was formed by said Tucker Dayton ’10, Conner Scott ’10, Matt Doyle ’10, Albert Ford ’10, Peter Sullivan ’10, Commissioner Hunter Huebsch ’11, Ted Growney ’11, Jimmy Bitter ’11, Will Swindell ’11, Alex Ward ’11, George Wheatley ’11, Bobby Osgood ’11, Sammy Redmond ‘11 and myself. This past winter, the DAFFL completed its 8th consecutive season. Over the past 8 seasons, members of the league have continuously participated, even during stints in the far reaches of Africa, the volcanic wastelands of Iceland, the pirate-ridden seas of the Indian Ocean and couches in their parents’ basements. Why, some have asked, have members of the league gone to such lengths, such sacrifice to compete year in and year out? The answer is simple: the eternal glory of having one’s named etched on the DAFFL Trophy for generations to read and revere. With that in mind, I am almost pleased to congratulate this season’s champion, Mr. Peter “I’m the captain now” Sullivan ’10, on a fantastic, though remarkably lucky victory. Even while posted aboard a shipping vessel en route from the seas of Southeast Asia to the Mediterranean, Captain Sullivan managed to make a slew of savvy roster moves with suspect internet connectivity to lead his squad of misfits to victory. Well done, Pete. My team was not so lucky. Despite my advantageous conditions stuck in a cubicle with constant light-speed internet for 16 hours a day, my team was nothing short of disastrous and ended in the darkness that is last place. After months of self-loathing and questioning who I am as a person, I have emerged and am ready again to vie for the most prized trophy sports, fantasy or otherwise, during the 9th consecutive season of the DAFFL. 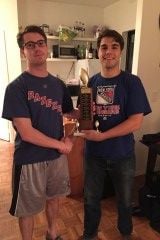