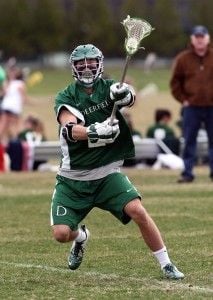 The NCAA has specific course credit requirements in order for a student to participate in collegiate athletics. Therefore, if you aspire to play Division I athletics, you should be mindful of the NCAA course requirements below. Since these course requirements must be satisfied in the first four years of high school, Division I-minded students who have repeated a year of high school should be extra vigilant and review the information below. Vita Thiel, our assistant registrar, will assist you by reviewing your transcripts and advising the appropriate course of action. In the meantime, please review your credits and courses before contacting Mrs. Thiel so that your discussions can be more focused and efficient. Most questions about eligibility are answered in the 2015-16 Guide for College-Bound Student-Athlete.

In order to be eligible to compete in Division I College Athletics, a student must have over a 2.0 GPA in sixteen core courses and have the minimum SAT or ACT scores for that GPA (see the NCAA Eligibility Center website for the NCAA GPA/Testing Sliding Scale).

Myths of the Recruiting Process

Myth: If you are good enough, coaches will find you.

Reality: Recruiting is now a global process, and despite your skills or success in high school, it is extremely easy to be overlooked by college coaches. Therefore, it is essential for you to contact coaches in a systematic and timely fashion.

Myth: College coaches can contact me anytime they want.

Reality: There are strict rules as to when a coach can send you literature and how often they can contact you at the NCAA level. The good news is that you can contact college coaches at any time so long as you make the phone call, text, or send the email. Additionally, social media contact between high school athletes and coaches is not as defined. Private messages between athletes and Division I coaches are permissible, but public messages (such as wall posts on Facebook) are considered a secondary violation of NCAA recruiting rules. However, Division III sports programs, which have allowed unlimited texting as a recruiting tool since January, do not allow coaches to contact athletes via social media.

Myth: If you receive a letter from a coach, you are being recruited.

Reality: Coaches send out thousands of letters to high school athletes they may or may not have heard of and there are probably 500 kids tearing open the same exact letter you received. Receiving a letter means a coach knows your name and knows you play the sport they coach. Respond to the letter and follow-up with the coach. Until the coach calls you, invites you to the school, and makes you a formal offer to join their program, these letters don’t mean too much.

Myth: College coaches will help me get into their school if I am on the bubble academically.

Reality: While being recruited by a college coach can be an advantage over applicants who are not athletes, you need to be very close academically to what the school seeks out in any student. Coaches can submit a list of names to the admissions department, but you need to be committed to the coach and express a strong interest in attending that institution. At the end of the day admission offices make admission decisions, not coaches.

How do you establish a relationship with the coach?

Schools have recruiting forms on their websites where you are asked to fill out sport and academic information. The best time to fill out these forms is in your sophomore or junior year, depending on your sport. Generally speaking, the coach will contact you with a follow-up email after you have filled that out.

What is the Academic Index in the Ivy League?

The Academic Index combines numeric values based on a student’s SAT and SAT subject test scores plus his/her class rank or GPA.  One of the most misunderstood aspects of how the AI works is its fluctuation from institution to institution. Because the eight Ivy League members have varying academic standards and the basis for the athletic AI average is the overall student body, the average AI for the athletic cohort at school A, for example, is several points higher than the average at school B.  Finally, the AI is one of many factors involved in Ivy recruiting. Recommendations, interviews, socio-economic background, course of study, rigor, etc. all weigh heavily in the equation as well.

What is a Likely Letter?

Typically, Likely Letters are sent to athletic and academic recruits several weeks before official admission verdicts are slated to go out. This usually means some time in October for Early Decision/Action applicants and late-February or March for Regular Decision students. To receive a Likely Letter a student must complete and submit an application to the admissions office for review. Increasingly schools are using the Likely Letter to entice qualified applicants for particular programs or recruit students from various geographic locations.

The NESCAC is the New England Small College Athletic Conference. It is an athletic conference made up of academically selective liberal arts institutions. On top of the institution’s high academic caliber, the league is often considered the most competitive Division 3 conference.  Details on NESCAC can be found on their website.