It is an unlikely story with an unusual beginning. When first noticed by Mr. Boyden, Tom Ashley was having too much fun to go to school. Swimming as early and often in the season as possible, fishing, hunting, and tending to chores, he was an awkward, reticent Old Deerfield farmboy who had an indifferent attitude toward education. Mr. Boyden detected something more in Tom’s character: honesty, loyalty, enthusiasm, resilience, and reliability.

By the time of Tom’s June 1911 graduation from the Academy, he had developed into someone admired and respected by his headmaster and his peers: a boy whose loyalty to his school was overshadowed only by his ability to give selflessly to benefit others. Never a top student, Tom epitomized the term “well-rounded.” He was described by friends and faculty as a young man whose strength of character defined him: he was committed to his studies, to athletics, and to his friends, family, and community.

His success continued. Having overcome the awkward shyness that plagued him early in his Deerfield career, Tom matured into someone for whom worldly success was predicted by all who knew him. When he graduated from Amherst College in 1916, he was twenty-two years old. He briefly considered a career in business (in oil, to be exact), but an offer from Mr. Boyden to teach at Deerfield made him reconsider his future.

“I want to repay what Deerfield has given me,” Tom wrote when accepting Boyden’s offer to return to Deerfield. He continued, acknowledging that it was his great fortune to attend the Academy and that those four years had shaped the man he had become. With this affirmative reply to his headmaster, Tom Ashley traveled back up the Valley to become a partner in the work of building a great school, and while Tom’s contribution to the fortunes of Deerfield was compressed into a little more than a year of formal service, the impact of his commitment continues today. 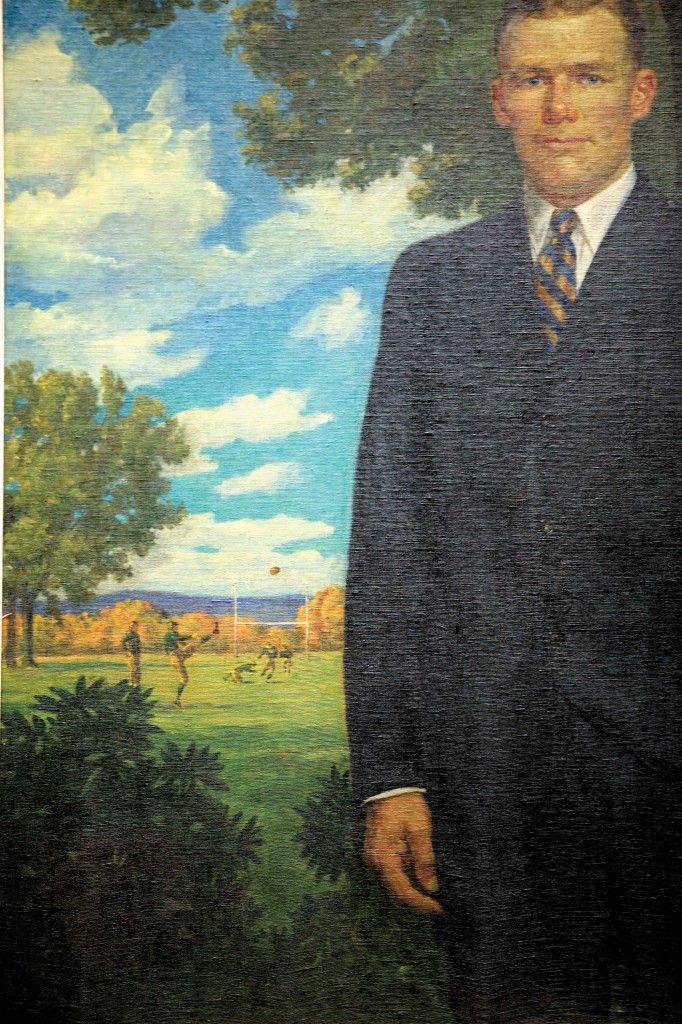 From 1915 to 1917, Tom pushed for both the physical and academic expansion of the Academy with a re-installation of a boarding department at its core. Together, Tom and Mr. Boyden intuited that the 18th and 19th century New England academy model could be expanded, allowing Deerfield to compete for students with more established schools like Taft, Groton, and Phillips Exeter. Interestingly, Mr. Boyden was not as enthusiastic as Tom regarding the boarding department, and the young man who Mr. Boyden had cajoled into the classroom now had to convince his mentor that a dormitory would be a healthy addition to Deerfield.

Educational philosophy seemed particularly important to Tom, and he felt that it would define Deerfield. Influenced by educational reformers like John Dewey and Charles Hughes Johnston, (The Modern High School, 1915) Tom convinced Mr. Boyden that the school needed a catalogue to describe in print what potential students and their families could expect of a Deerfield education. Handwritten by Tom, the completed outline for the “Booklet of Deerfield Academy” filled three slim notebooks, encapsulating his personal thoughts about Deerfield’s distinctiveness. Reading this document today, it seems clear that either Tom was remarkably prescient about the Academy’s direction—or that the Academy itself was patterned around his words and beliefs.

Tom wrote much of the Booklet of Deerfield Academy during the summer of 1916, when he was taking graduate classes at Columbia University in preparation for his teaching duties at Deerfield. Correspondence with Mr. Boyden flew back and forth between the Academy and the city, as the two new colleagues laid their plans:

It has been the intention all thru to escape the cut and dried formal expression and subject matter of most catalogues and to really get across the spirit and aims of the school, and for this reason its presentation may seem a little out of the ordinary.

The aim of the school is that the welfare of the group is attained through the development of the individual.

The chief aim of the school may well be said to be the development of its individual students with development not confined to the intellectual, solely, but a full development in all phases of life. This enables students to better take their place and be of greater influence in that field of endeavor which may be chosen (after Deerfield).

This ideal involves intellectual development, a desire to do service through influence, and a high standard of character…a system cannot develop character, rules will not make citizens . . . our aim is to preserve individuality and by it develop character. 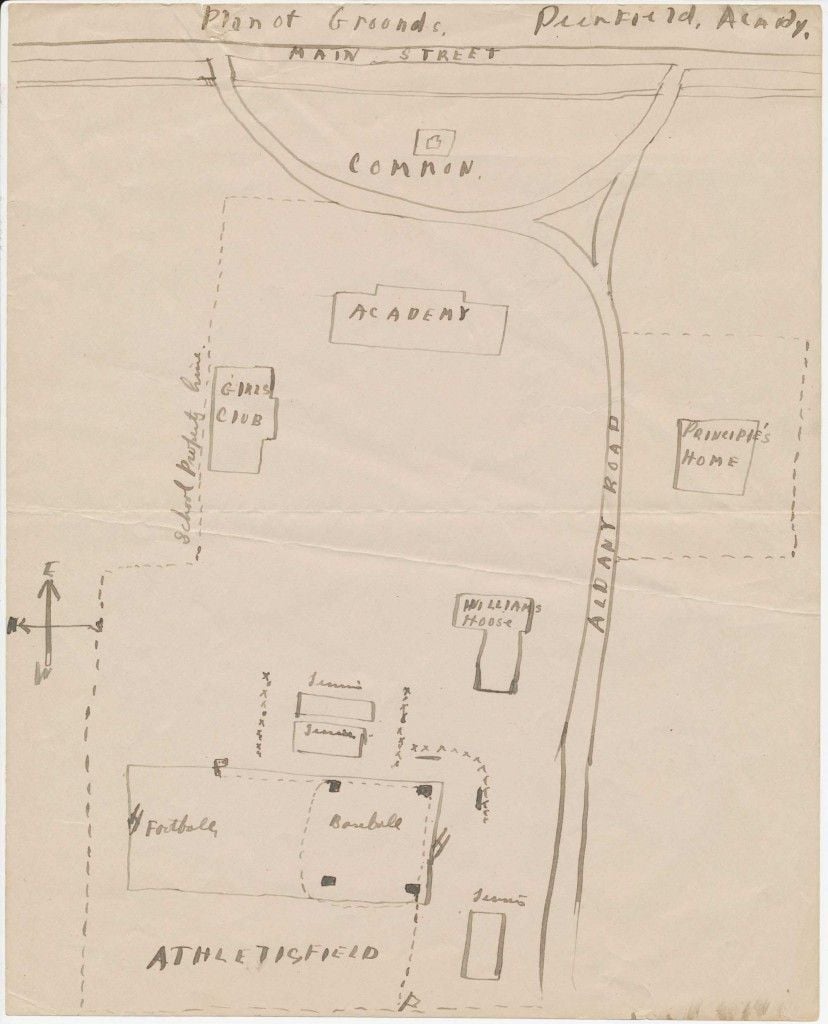 When completed, Tom Ashley’s catalogue was a tapestry of facts, philosophies, and ideals. Tom even went so far as to attempt to describe the very spirit of Deerfield:

If the spirit of Deerfield Academy could be condensed into a word, that word would be “loyalty.” Loyalty to the school, to the principles for which it stands, to its aims, to the faculty, and each other. Yet that spirit of loyalty is not a feeling that can be created at will, or forced upon a school, it is a spirit that must come of itself . . .

One of the essential components of character that Mr. Boyden recognized in Tom was in fact loyalty, a characteristic that Tom demonstrated time and again through his work for Deerfield. And it was this sense of loyalty that must have made Tom’s decision to leave Deerfield for service in the Marine Corps both easy and difficult. Although he sounded certain in saying “My country needs me. I must go.” . . . Deerfield was never far from his mind. When Tom arrived at the Marine Barracks in Norfolk, Virginia, he discovered he was joining his class a month late and would have to catch up. He wrote to Mr. Boyden:

I will have a fine opportunity to try out our theory that a person with a broad education and natural abilities should be able to grasp almost any situation in a short time . . .

Tom was killed in action on June 6, 1918 while leading his battalion in an attempt to recover lost territory. An eyewitness later said that Tom stood “calmly and confidently” until it was time to attack, and then he urged his men on with the rallying cry, “Come on, follow me!”

Mr. Boyden celebrated the life of his student, friend, and colleague by recounting his story to Deerfield students—the story of a Deerfield Everyman who aspired to give back to his school and country by developing strength of mind, spirit, and body in his own and future generations of students. In time, Mr. Boyden was known among educators for his achievements with “unlikely material”—unlikely material such as a young boy who would rather roam the woods than sit in a classroom. Over time, the telling of Tom’s story became a tradition, and, somewhere along the way, Tom’s story began to shape the character of Deerfield students much in the same way that his relationship with Boyden shaped the character of the school itself.

As Mr. Boyden continued to share the story of Tom Ashley, an oral tradition began. Today, the story is shared with students at two important moments. New students gather in the fall with Head of School Margarita Curtis, and she tells them the story of a young man who spent his boyhood in the meadows and woods surrounding Deerfield, more comfortable out in nature than in the classroom, and of the quietly determined Headmaster who recognized the boy’s good character and potential; and of the young man who left his beloved Academy to serve his country. The story is told again on the eve of Commencement, as graduating seniors mingle their own stories in with Tom’s, finding the measure of both in each other.

Brian Cooke, a member of the Academy’s History Department for many years, memorialized the Tom Ashley story as part of his book, Frank Boyden of Deerfield: The Vision and Politics of an Educational Idealist. At the end of it he noted, “Tom Ashley’s death no doubt amplified Mr. Boyden’s conviction to fulfill the plans the two friends had framed for Deerfield . . . to a great extent Mr. Boyden built Deerfield Academy as a monument to Tom Ashley’s exemplary spirit.”

Tom possessed a vision for the Academy, and he impressed his vision upon Mr. Boyden, who at the time was reluctant to expand the school—and was even contemplating a departure from Deerfield. After Tom died, Mr. Boyden stayed in Deerfield and spent the rest of his life making that vision a reality. It has been said of Tom that “if you seek his monument, look about you.” And yet, few people know the extent of his influence on the Academy; Tom Ashley links the school’s past and present.

Although the details of Tom’s life might be foreign to current students, they can easily translate its lessons of character. And although we think of Tom as a traditional figure in the Academy’s history, it was his drive to improve and innovate at Deerfield that endeared him to Mr. Boyden and all of us.

When asked to distill the importance of Tom Ashley’s legacy into a single word, Head of School Margarita Curtis doesn’t hesitate: character.

“Character is the essence of what Deerfield has done over the last century. We have lots of smart people at our school but having good people is what we are known for. At the Academy we are constantly training students to ask, ‘What can I do? How can I make my school, my community, a better place for all to live and work?’ That is the mind set we hope each Deerfield student will carry with them for life.” ••

Grace Friary is an independent public relations consultant and freelance writer living in the historic McIntire District in Salem, Massachusetts. For thirty-five years she and her family lived in Deerfield. Like Tom Ashley, her children—Richard ’92 and Elizabeth ’93—grew up on The Street.