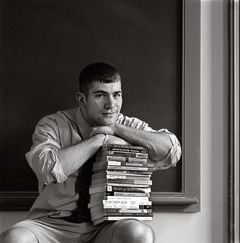 All my life I was the kid who knew the answer, but never raised his hand. Who could make the shot, but was afraid to shoot. Who knew the lyrics, but was afraid to sing. Who had an opinion that was never heard. The lesson I learned is not to be afraid of my own light, but to be myself to my full potential and be proud of what I can do.

“So where are you going next year?”

“It’s basically a high school you live at.”

“Oh, wait, I thought you graduated?”

“I did. I’m doing a postgraduate year.”

“A postgraduate year.  It’s like a fifth year of high school.  I want to play football in college and even if I can’t, I’ll be able to go to a better college than I got into this year.”

“Um, not the way you’re thinking of.”

The sun shined through the windshield as I reclined my seat and closed my eyes.  I could only remember a handful of times I had ridden on the Mass Pike.  Appropriately, most of those trips were to Deerfield Academy.  This trip down the Pike, however, took on a completely different meaning.  Should I be excited to be moving on to another stage of my life?  Embarrassed to be going back to high school?  Sad to be leaving my family, friends, and my hometown, the only things I have ever truly known?  Before I knew it, my father and I were approaching Deerfield’s campus.

“I think we go there”, I said to my father, pointing toward the Academy Building.  A massive flock of people was converging on the door.  Adults were chatting.  Girls hugged each other.  Boys patted each other on the back.  Tears swelled up in the eyes of a girl walking by me.  These weren’t tears of sadness.  These were tears of joy.  Tears of joy on the first day of school?  That’s when I started to realize that maybe I wasn’t just going back to high school.

I began to feel comfortable in my first football practices, but when classes began the next week, I faced new challenges.

Every school, public, parochial, or private, seems to use the term “rigorous academic demands”.  After a short time at Deerfield, I came to find that not all schools mean it.  After coming from a public high school where some students would literally complete their homework in a few minutes before class started, “rigorous” seemed like too gentle a term for Deerfield.

There were no more rows of desks.  No more white boards.  No more slackers.  I took a seat on the side of the seminar table that was farthest away from the chalkboard hoping to hide in the back of the class, but there was nowhere to hide.  Ms. McConnell took a seat right next to me and began to explain the expectations of the class.  This was my first European History class.  In front of me there was a stack of books and a syllabus which told me I was going to read all these books by Thanksgiving.  Staring blankly at the stack, I realized it was greater in number than all the books I read last year combined.  Normally, when a student is faced with a challenge this great, a lot of them would simply decide not to do the work.  However, I quickly knew this was not an option.  Quizzes would follow every reading and an intense discussion of the novel would be the cornerstone of the class.  Every class would be just as demanding, even dance.

When I was younger, I used to mimic the dance moves to music videos.  So, dancing has always been one of my hidden hobbies.  The opportunity arose to take a dance class and after months of practicing, I was asked to perform in the Winter Showcase.

The hours of rehearsal, the will and determination to create an outstanding piece, and exhibit composure and confidence while performing in front of hundreds of people, gave me a newfound respect for all the artists at Deerfield.  I understand that they take the arts just as seriously as I take athletics and as others take academics. If hard work were a song, there would be many different ways to dance to it.

My overall academic experience at Deerfield has made a serious impression on me.  My writing is more descriptive and sound.  I know how to show, not tell in an essay.  I read with the purpose of getting something from a story, not just to finish it.  I can apply the concepts of theories formed in the past to contemporary situations.  I have a better understanding of how the world works.  And, I can dance.

All these things, however, pale in comparison to the most significant lesson I have learned from my postgraduate year, a lesson I learned from the students at Deerfield:

All my life I was the kid who knew the answer, but never raised his hand.  Who could make the shot, but was afraid to shoot.  Who knew the lyrics, but was afraid to sing.  Who had an opinion that was never heard.  The lesson I learned is not to be afraid of my own light, but to be myself to my full potential and be proud of what I can do.

For this, I thank them.